Owner Adam Eichhorn wrote in to the paranormal podcast Kinda Makes You Think. We share his story on Episode #4.

• Built in 1868 by John and Mary Owens. John died before home’s completion and never lived in house.

“It is a house that was built in 1868 for John Owens Sr. John Owens was the son of James Owens who received the 160 acre parcel from the US Government on March 5 1830. This house has always remained in the Owens family. We own it now and my husband is an Owens Descendant. We have John Owen’s will in our possession which is part of the abstract. John Owens died in 1868 before the house was completed. His will specified that the house was to be finished before any of the remaining money was distributed. The house is for sale and is located in Franklin Indiana at 5705 E 100 N and sits on 2 acres… It has 6 fireplace mantels, 8 closets, wrap back porch, herringbone brick floor in cellar, 2 sided fireplace in kitchen & dining room, 7 exterior doors, pantry and National Register eligible. interior is original and woodwork intact. no plumbing, no bath, no electric, city water & natural gas available. needs complete restoration.”

• Interesting comments regarding on oldhousedreams.com:

“… my family has been in Franklin since 1924 and I know this house well. This was an early farm in the area. The wealthy farmer built this place and had 6 or 7 kids. Three of them never married and continued to live together in the place for the rest of their lives. The last spinster died about 1950. She will the house and farm to the next door neighbor who had been farming the land and looking after them. The house has never been inhabited since the original family died out 60 years ago. The spinsters never updated the house either. I was surprised to see the listing say 1 bathroom. According to local lore indoor plumbing was never put in for either a bathroom or kitchen. You can still see the outdoor hand pump in one of the photos. Towards the end they did put in a bit of electricity. You can see a few conduits and outlets tacked to the walls. There is absolutely no wiring inside the walls and most rooms are not electrified at all. The farmer who owns it lives across the road so every week he would come over and mow the yard, so the setting is beautiful and has always been maintained. And yes, he did replace the roof.”

“Time capsule is quite appropriate in this case with the understanding that term means the passage of time has tread very lightly in this house. Ghosts? Wouldn’t surprise me in the least. While I appreciate the historical context provided by the listing, some elements in this house seem to pre-date the Civil War. The return gable ends harken back to the Greek Revival style as do some of the other details in this house. It would not surprise me to learn this house was “Italianated” around 1868.” 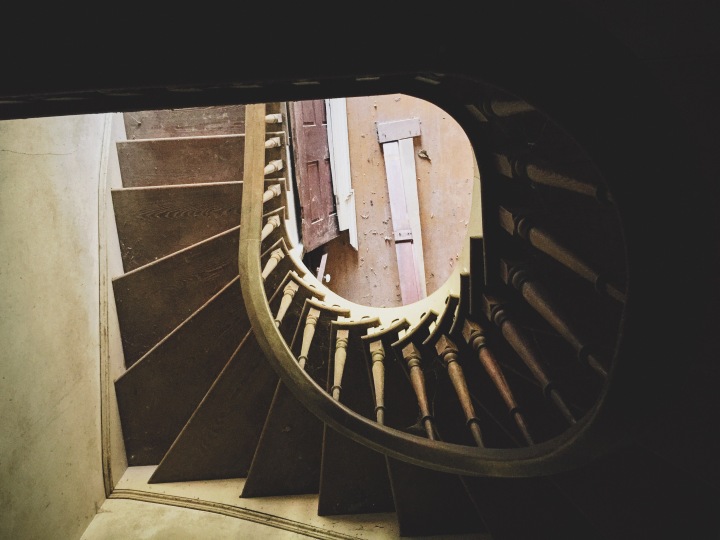 • Otho Henry Pritchard (1909-1995, buried Second Mount Pleasant Cemetery, Franklin) is Mary Pritchard’s son, grandson of William and Cordelia (Cora) Owen, and great-grandson of John and Mary. Otho was the last Owens descendant to live on the property. It was during his days that the legend ofThe Candlelight House was born. Even in the early ’90s, the house remained primitive without plumbing (it is said Otho died shortly after falling coming back from the outhouse), and  only three rooms had electricity. Beyond folks that knew Otho lived in the house, to the rest of the world it appeared to be abandoned. So as Otho used candles or lanterns to move throughout the house at night, from the road it gave passerbys a “ghostly” impression.

• From William T. Owens’ (1855-1899, buried Second Mount Pleasant Cemetery, Franklin) obituary in The Franklin Democrat, 3/17/1899:
“Wm. T. Owens, son of John and Mary Owens, was born April 22, 1855 at the old homestead about four miles east of Franklin, where he has since lived. He died there March 9, 1899, at 11:30 p.m., aged 43 years, 10 months, and 17 days. Out of a family of nine children only two survive. He was left without a father at the age of thirteen but his mother lived in the home with him until 1895, when she was called away. He was married to Cora Patterson, Jan. 28, 1880. To them were born six children, five daughters and one son. These, with his wife and a host of relatives and friends are left to mourn his loss. He had been afflicted with Bright’s disease for the past ten years, of which he died …”

• From Mary Owens’ obituary in The Franklin Democrat, 3/17/1895:
“For many years her son W.T. Owens, and family have lived with Mrs. Owens in the home place.”

• John and Mary (Fisher) Owens noted as “early settlers of this county.”

• James Owens, John’s father, came to Johnson County about 1830, and here entered a tract of government land, to the improvement and cultivation of which he devoted his attention and there spent the remainder of his life.
— According to “History of Johnson County, Indiana” by Elba L. Branigin, 1913

• According to historic landowner maps on HistoryGeo.com, James Owens acquired 160 acres (sale date of 1820/patent date of 1830) in the area of N. 500 E. and E. 100 N. When area viewed in a “real time” Google map, appears to be same locale of home, (Noting nearby streets Jeff Drive and Evelyn Avenue for reference) verifying note of acquisition of land from father James.

Owens Surname and Other Surnames

So many of these names are common to different family lines, can’t verify if it’s the same or any relation at all, but thought this story was interesting. Would these mentioned landmarks be close?:

“One Sunday morning Daniel Covert heard a strange noise in the distance and went to investigate. It led him into an Indian camp. They were at their devotions, and motioning him to a seat, he heard them sing hymns and utter prayers in their own tongue. They are supposed to have been the same Indians who had before that camped on Sugar Creek. A young Indian hunter, belonging to the same band, was accidently killed on Sugar Creek, and buried at the roots of an oak, still standing on the bluff, between John Owens’ house and the bridge. While “tire hunting” on the creek one night, he was shot by one of his own band by mistake. His comrades made a trough of an ash tree into which they put his body and covered it with a slab. Over his grave they set a post, as tall as a man, which they painted red, with a cross-piece painted black. The grave was enclosed with ash palings, driven into the earth.”
— from “History of Johnson County, Indiana. From the Earliest Time to the Present, With Biographical Sketches, Notes, etc., Together with a Short History of the Northwest, the Indiana Territory, and the State of Indiana” by David Demaree Banta, 1888.

Also:
From information given by a psychic that went into the home, she named a Sarah and Mimi: Cordelia Owens’ mother was named Sarah. (Her father was William Henry.) No one has come across a Mimi, but it is sometimes a nickname for Mary or grandma.

This was an exciting investigation. Not only was it a fantastic location, but the owners are wonderful too. We felt like we got more than a few validations of their story and claims of activity. I look forward to many more nights at The Candlelight House getting to know its history and the ethereal residents that still call it home.

See more of The Candlelight House:

The Hauntings of The Candlelight House – Franklin, Indiana

A Haunted Afternoon with RTV6: Featuring The Candlelight House