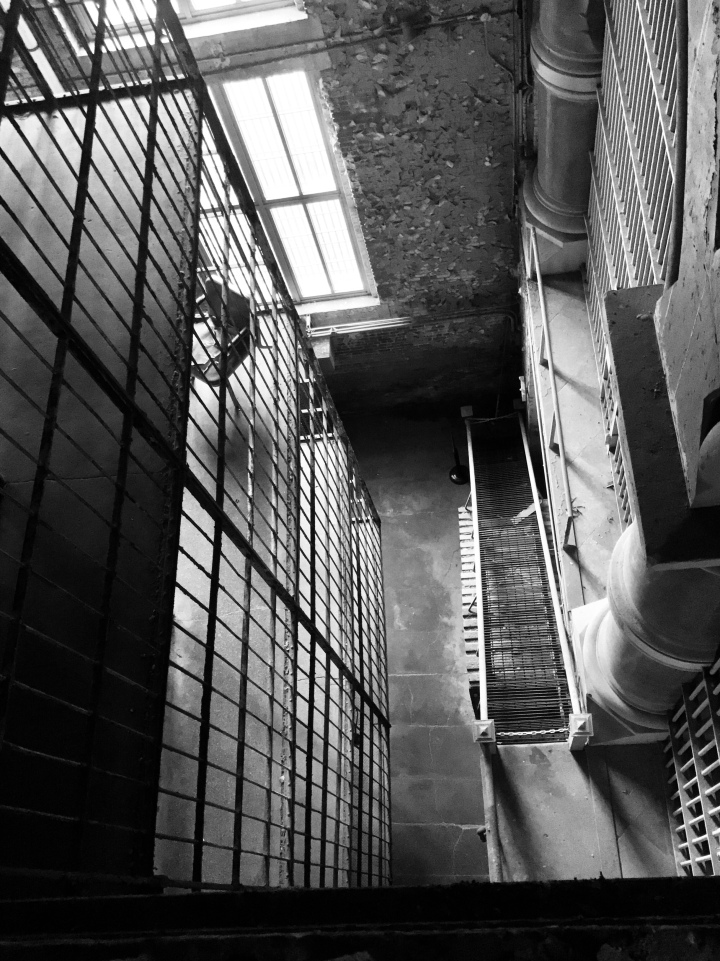 • Field where reformatory would be built named Camp Mordecai Bartley, a training camp for Civil War soldiers in 1861, named in honor of Mansfield man who served as state governor in 1840s. More than 4,000 soldiers trained at site, later named Camp Buckingham and Camp Mansfield.

o Soldiers perished in training camps because of poor sanitary conditions, hygiene and exposure to communicable diseases. One soldier “announced to all that he had been visited by ghosts and spirits while training at the camp at Mansfield and was very agitated. The unfortunate soldier was often so shaken and disturbed from these experiences that he was later determined unfit for duty.” Some soldiers refused to do drills in certain areas; high rates of ammunition failure; whispers and muffled voices and unexplained sounds from ground reported. (“The Haunted History of the Ohio State Reformatory,” Sherri Brake)

• Mansfield promoted as a candidate for the location of the new Intermediate Penitentiary (original name before Ohio State Reformatory) in 1867.

o When war was over, Mansfielders wanted former camp put to good use and suggested state build large prison there … site was well drained, had large spring, close to Erie railroad and two main highways and offered grand view of countryside. Plenty of room for large orchard and farm. (News-Journal, 10/8/1978)

o Prison campaign leader Roeliff Brinkerhoff, an authority on prison reform concerned about cruel treatment he had witnessed in prisons and lack of care for persons suffering from mental illness. (News-Journal, 10/8/1978)

• State selected Mansfield for planned state prison in 1885, a new concept of Intermediate intended as halfway point between Boys Industrial School and State Penitentiary for young first-time offenders. The city purchased 30 acres of land for the prison, and the state acquired 150 acres of adjoining land.

• Construction on historic $1.3 million stone and metal prison began in 1886. Original architect Levi T. Scofield employed architectural styles of Victorian Gothic, Richardsonian Romanesque and Queen Anne to help encourage inmates to be reborn into their spiritual lives. The creation and construction of the entire building entrusted to architect F.F. Schnitzer, whose name also appears on the cornerstone.

• Name changed from Intermediate Penitentiary to Ohio State Reformatory in 1891.

o “Largest institution of its kind in the United States, if not in the world.”

o “It is the intermediate step between reform schools and penitentiaries. It seeks not only to discipline, but reform the men who come within its jurisdiction.”

o “It attempts, also, to rehabilitate the men who leave its doors; to help them find new places for themselves in the social structure outside the high gray walls.”
(From “The Ohio State Reformatory, 1896-1934” as reprinted in
News-Journal, 10/4/1996)

o Inmates designed and maintained small lake and picnic area on the grounds that residents used for play or picnics. (The Tribune, 10/20/2002)

o Inmates grew and canned own vegetables, raised cattle, churned butter and made own clothes. (The Cincinnati Enquirer, 6/17/2001)

o Inmates had hand in beautification of reformatory grounds. One inmate awaiting action on plea for pardon in 1930s built rock garden at one end of lake. Visitors learned of project and came to admire his work, known as “Frenchy’s Rock Garden.” (News-Journal, 10/8/1978)

• Due to delays caused by funding problems, construction not completed until 1910.

• In 1933, educators and prison experts deemed overcrowding, conditions at OSR “a disgrace” with “little or no real rehabilitative values.” (News-Journal, 3/25/2001)

o A 1930 fire killed more than 330 inmates at the Ohio Penitentiary, which housed violent criminals. More than 200 surviving inmates were transferred to OSR, where they were kept in a small storage attic. Conditions worsened. (News-Journal, 12/5/2016)

• Four inmates charged in court brief that prison officials violated inmates’ constitutional rights, including freedom of speech and due process, as well as freedom from cruel and unusual punishment. (Marysville Journal-Tribune, 11/2/1973)

• In 1978, Counsel for Human Dignity filed lawsuit on behalf of the 2,200 inmates, claiming rights violations because of being forced to live in “brutalizing and inhumane conditions.” (News-Journal, 12/30/1950)

• Remained in full operation until 1990 when closed by Boyd Consent Decree, a federal court order resulting from prisoners’ class action suit citing overcrowding and inhumane conditions. Judge ordered prison closed by the end of 1986, but closing date moved to 1990 due to delays in constructing replacement facility, the Mansfield Correctional Institution, which stands to the west of the old prison.

• Most of grounds and support buildings, including outer wall, have been demolished since closing. Parts of infrastructure including power plant and selected workshops/outbuildings torn down in 1994. Mansfield turned over what’s left, including administration building and massive cellblocks, to Preservation Society. (News-Journal, 3/25/2001)

• More than 200 people reportedly died at prison, which housed 154,000 inmates during time as working prison.

o “At least one inmate managed to hang himself, another set himself on fire, once two men left too long in a single tomb-like cell, only one walked out, leaving his cellmate’s body behind, stuffed beneath a bunk.” (News Channel 4, Columbus, Ohio, 1997)

• In 1933, inmate William Chapman killed in escape attempt, dropping from the roof of dormitory while trying to lower himself to ground with rope made of heavy twine. (News-Journal, 12/30/1933)

• Guard shot down and killed fleeing inmate Tony Amadio, 21, attempting to escape with another during a dense fog. (Marysville Journal-Tribune, 3/23/1942)

• In 1948, parolees Robert Daniels and John West kidnapped and murdered John Niebel, the prison farm’s superintendent, his wife, Nolanda, and daughter Phyllis and dumped their bodies in cornfield. Pair had reportedly been intent on revenge murder of guard “Red Man” Harris (also see below), but, drunk, stumbled into wrong quarters. “Mad-dog killers” found after two-week crime spree in which the men killed six. West killed by authorities in shootout following several-state manhunt. “I’ll get the chair for this,” Daniels quoted as saying as signed confession papers; executed in 1949. Said to be bloodiest single incident in prison’s history. (News-Journal, 3/25/2001; News Channel 4, Columbus, Ohio, 1997; Akron Beacon Journal, 10/4/1998)

• Governor and authorities met to address parole system and conditions at reformatory following slayings of six people. Former inmate Frank Korecky charged that Mansfield Reformatory “is a crime school, not a reform school.” Korecky said Robert Daniels (see above note) “deserves to die for what he did, but something good can yet come out of his crime career if it awakes the people to the brutal conditions at Mansfield.” Also learned that Willis “Red” Harris, target of Niebel family murders, had served 18 months in Ohio penitentiary for shooting a reformatory parolee in 1942. Mixed population where “normal prisoners are thrown in with psychopaths and below-average inmates” criticized. System changes proposed. (News-Journal, 7/26/1948)

o Reformatory became congested, and cells intended to support a single man now contained three. The attention changed from renovation to punishing disobedient inmates. The penalties were directed with old-fashioned torture devices comprised of “the butterfly,” a method of electro-torture, water tubes, sweatbox and solitary confinement. Along with the likelihood of being tortured, convicts were also endangered to the extreme by other convicts, horrendous food, rat plague, and transmittable diseases. Special treatment was likely, but only to the prisoners who could find the money to pay for it. (thevintagenews, 8/27/2016)

• In 1950, Helen Bauer Glattke, wife of Arthur Glattke, reformatory superintendent and chief of Division of Corrections, died at age 41 after suffering gunshot wound to lung/pneumonia at superintendent’s residence housed at the reformatory. Gun kept at residence for convenience of superintendent, who believed his wife was dressing and reached into a shelf to move the gun away from jewelry box. The .32 caliber automatic pistol apparently slipped from her hands and discharged as hit floor. Coroner’s Office ruled death accidental. Dr. J.V. Horst, OSR physician, asserted gun defective and frequently jammed. Helen Latke mother to two sons, Arthur Jr. and Teddy, then ages 13 and 9. (News-Journal, 11/7/50)

• 1957 riot earned 120 inmates visits to “the Hole,” area of solitary confinement cells equipped with nothing but toilet and bunk for 30 days with 20 rooms occupied between them; at least one inmate’s murder alleged during this period; his body hidden by fellow inmate for several days under bedding; prisoners sometimes slept on bare concrete floors. (News-Journal, 3/25/2001; deadohio.com)

• “Youth describes prison perversion in plea not to be returned”: Charles Randles, 20, begged court not to return him to reformatory after escape from deputies, recounting story of being victim of attempted sexual attacks by other victims. (The Daily Reporter, 12/23/1970)

• Captain recalled guard attacks and gruesome inmate deaths, including one who set himself on fire with paint thinner. “Most guards would quit within the first 30 days,” according to Ike Webb. (News-Journal, 10/27/2002) 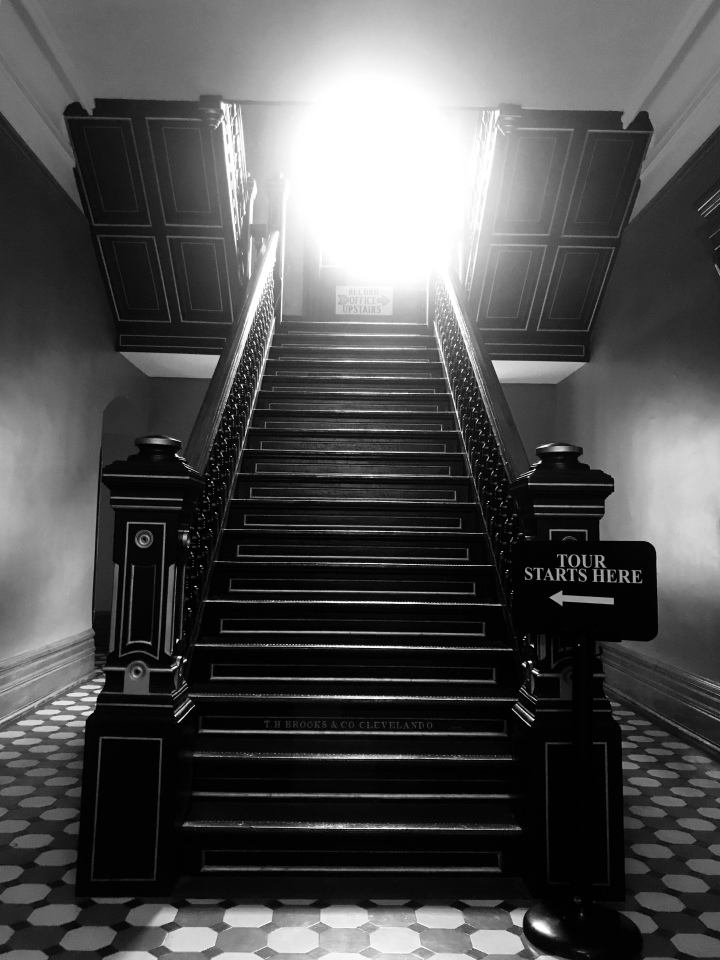 • Prison setting for many television and film productions, perhaps most notably as Shawshank State Prison in the 1994 film “The Shawshank Redemption.”

• Because of role as intermediate prison, held few famous inmates during history, though some went on to future notoriety, including Henry Baker, one of men convicted of Brink’s robbery in 1950. (News-Journal, 12/9/1990)

• Prison dungeon a dark and mysterious area where records were stored and religious relics and statues kept when upstairs chapel was transformed into recreation area. “When a new guard was hired, older guards would place statues around every corner and then ask the new guards to check on things in the dungeon,” according to Janice Demyan, preservation society tour coordinator. “Armed with nothing but a flashlight, the new guard would walk around the corners and suddenly see these tall statues. The older guards got a kick out of it because they know how dark and eerie it is down here.” (The Cincinnati Enquirer, 6/17/2001)

All historical research compiled by the awesomeness of Amy Eunice Specter. 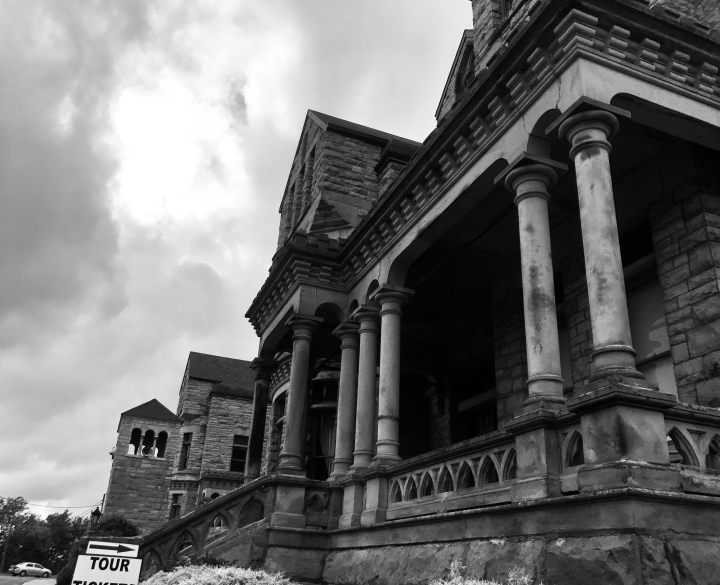