A brief EVP session while on a walk with my dad. Did we hear from the ghost of Henry Dixon inside the iconically haunted tunnel in Tunnelton, Indiana?

• Originally constructed in 1855-57 for the O&M (Ohio & Mississippi) Railroad between Tunnelton and Ft. Ritner.

• 1,750 feet in length, the “cave,” then longest in state, carved through solid rock of Tunnel/Horner Hill because route blocked in one direction by White River, saving about 8 miles of travel. Curve prevents other end from being seen at opening. “There is no point in it where the visitor can see the faint glimmer of light at both ends at the same time. The walls are thickly covered with soot and the tunnel is exceedingly dark. An ordinary flashlight makes no impression and lends no assistance to the pedestrian. It requires the powerful headlight of the locomotive to pierce the thick gloom.” (The Indianapolis Star, 9/13/1925)

• First O&M train travels through county in 1856 with disappointing inaugural run through Big Tunnel. Special train with “a fancy flat car loaded with young girls dressed in white” stalls halfway through and has to be pulled out with mules. “Smoke and soot ruined everyone’s clothes and they had to walk out.” (Thirty Three Years in the History of Lawrence County)

• Village of Tunnelton laid out in 1859 and platted on north side of O&M line; named for its proximity to two railroad tunnels. Originally work camp for construction of tunnels. (“Little” Tunnel constructed between Tunnelton and Riverdale.)

• Falling rocks frequently obstruct track and endanger traffic, prompting the railroad to enlarge, shorten to approximately 1,730 feet and arch and line with brick in 1898/1908-09. 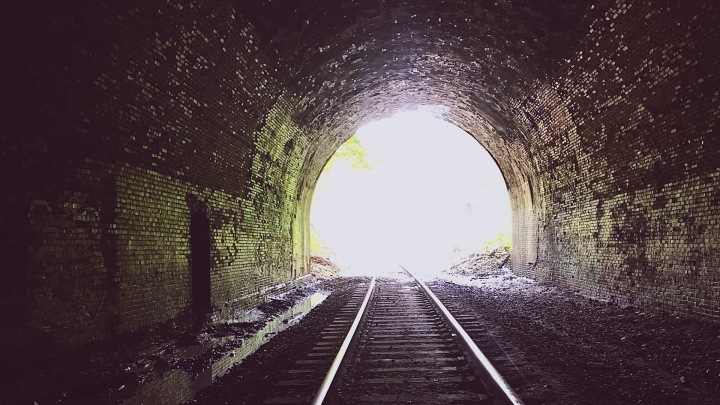 • Henry Dixon, 35-year-old night watchman at tunnel, found dead by day watchman about 200 feet from entrance to the tunnel with wound on head. Lantern found beside the track, still burning. Murder/robbery case never solved. Some cited hostility between Dixon and tunnel workers, or a motive of revenge. (The Indianapolis News 7/23/1908; The Tribune (Seymour) 7/23/1908, 7/30/1908)

o “It was commonly known that he was murdered and his body dragged into the tunnel for a passing train to obliterate evidence of the crime. The episode was discussed for months and everyone knew who murdered Dixon but it was impossible to legally prove.” (History of Lawrence County, Indiana)

• Falling rock presented such danger that “Watchman Fields, employed full time by B&O, walked the entire length of that hole after each train passed through and carried out rocks which had been dislodged from the roof!” (History of Lawrence County, Indiana)

• Several wrecks in passageway, including severe incident in 1907 when coal car of passenger train jumped track and five mail, passenger and sleeping cars piled in a heap. No deaths reported, but injured passengers found by rescuers emerging from mouth of tunnel, almost overcome by foul air. (Muncie Evening Press, 6/20/1907)

• Julius Fullen fatally injured by train after he sat on track at east end of tunnel and presumably fell asleep. Walked a short distance to a home for help; suffered crushed arm, thumb and fingers cut off hand, hole in head and internal injuries. Lived with his brother in cabin at west end of tunnel. (Jackson County Banner, 8/9/1933)

• During Civil War and World War I, supplies and arms transported through tunnel. To prevent sabotage, guards stationed at each entrance. Edward Call, National Guardsman at Ft. Ritner, accidentally shot and fatally wounded in the soldiers’ temporary headquarters located in former railroad watchman’s house at east end of tunnel. Fellow guardsman with whom he was engaged in a “friendly scuffle” when revolver fell and discharged when hit the floor, suffered nervous breakdown after accident. (Jackson County Banner 4/18/1917)

• Not in tunnel, but related: Worst railroad wreck in county and history of B&O S.W. Railroad in 1909 when two freight trains collide head-on on sharp curve near Ft. Ritner, killing five railroad men and seriously injuring two others and causing massive pileup of wreckage. Miscalculation of time and confusion by engineer and conductor over time tables blamed, including one for Tunnelton.

• General note: Freight car hopping a favorite pastime during that era – many young men killed or maimed attempting to travel.

• Believed to haunt the location because of a tragic, violent death – sometimes found murdered and hung by a meat hook in the center of the tunnel.

• In late 1800s or early 1900s, watchman would walk the tunnel to clear tracks and make sure safe from caving in. After he was through he would wait at the end for a train and signal to engineer with lantern. One night he didn’t have enough time to run to the safety of a “dead man” chamber (indentation/safety rooms in the brick walls) and was sucked underneath train and decapitated. Now roams through the tunnel swinging his lantern from side to side looking for his head.

• One watchman returned to tunnel and found the other with his head cut off or swinging from a noose. Now at night can see hanged guard swinging in tunnel.

• Supposedly during World War I, two guards patrolled back and forth and met in middle with each pass. One guard reached the middle, but the other wasn’t there. He found him hanging from a metal spike in the top of the tunnel, dead.

• Watchman fell asleep and didn’t flag the train to warn it of the sharp turn in the tunnel. Train crash kills everyone, including watchman, who now swings his lantern at midnight to try and warn train.

o “I think everyone in this county knows, and most believe, the story of the Tunnelton Tunnel. There were two guards at each end of the Tunnel and two more inside constantly patrolling back and forth from end to end. One night the guards inside failed to report to the guards at the ends for a long time, so the guards at the end went in to investigate, knowing that no one had gone into the Tunnel. Near the center of the Tunnel they found the two guards with their throats cut, hanging from railroad spikes that had been jammed into the brick walls. The murder was never explained, but the spikes are still there. It’s supposed to be disastrous for anyone to touch those spikes.” – as told by Catherine Grisson, Indiana Folklore: A Reader

• Seen carrying lantern and his head or floating through at exactly midnight.

• Legend says if person walks to middle (darkest point) of tunnel will either experience Dixon brushing past, or he will mistake the visitor for his killer and chase the person out the other side.

o During remolding of tunnel, guards hired to prevent theft of building materials and stop vandals from strewing debris across tracks. Two men would meet in middle at designated times throughout the night, including Henry Dixon. One night on patrol he thwarted the attempted assault of a young girl by two men who had dragged her into the tunnel. A few nights later, Dixon failed to show up in the middle of the tunnel at the appointed time, so other guard searched and found him dead with his skull crushed so badly part of his brain was exposed. The news of his death was such a shock to his pregnant sister-in-law that she gave birth prematurely to a son – born with an exposed brain; the condition of his skull with a marked similarity to Dixon’s wound. Baby lived for several weeks and continually moaned “Oh, my God!” – as told by Phyllis Quackenbush Reed (Dixon was cousin of her mother’s), Indiana Folklore: A Reader

• Convicts put to work rebuilding tunnel. When tried to escape were killed and buried in tunnel floor. Their graves are visible humps.

• Construction of tunnel (though actually pre-dates Civil War) disturbed graves of the soldiers killed in the war/small battle fought near tunnel.

• Ghosts from cemetery believed to be located above the tunnel.

• Indian burial ground above the tunnel.

• As workers dug, bodies and caskets from cemetery located above began to fall, one by one, through tunnel roof. Some souls never recovered and wander tunnel, including frequently reported middle-aged man and young girl.

• Ex-convicts were sent on a mission by the South to terrify and kill people in the North. They were ambushed on the hill above the tunnel and killed and buried there. When tunnel built, their graves were disturbed, and they can be heard screaming when walking through the tunnel.

• During construction, bodies/caskets fell into tunnel after graveyard that sat on top of tunnel disturbed, and/or killing several workers and decapitating one.

• Headless construction worker paces tunnel searching for his head amid bones and body parts that tumbled into tunnel when construction disturbed an unknown cemetery, killing several workers and decapitating one.

• Worker decapitated during tunnel construction now seen in the tunnel (see above bullet).

• Few workers said to have died during construction of tunnel.

• Many claim to see a mysterious light, or watchman’s swinging lantern. Some say small at first and then gets bigger as it swings from one end of tunnel to the other. Also witness train and/or sound of train when one is not present.

• Group of men overheard in saloon talking about plans to rob Alfred Guthrie, wealthy resident of Tunnelton. Another group overheard their plans and followed them into tunnel, killing and burying them next to train tracks. *“Tunnelton Massacre” did occur in 1882 when residents ambushed and killed three would-be thieves – however, occurred in town and not in tunnel.

• Tunnelton rumored to be popular site for Mafia crimes. During Prohibition in 1920s mobster supposedly dragged a man into tunnel and shot and killed him. Victim now haunts the tunnel.

• Up tracks short distance from tunnel in area known as Devil’s Backbone, family killed when wagon fell into water and can now hear their screams.

• Visitors who write their name in the tunnel will be dead when it is erased.

— Special thanks to Amy Specter for the historic research!

Did Henry Dixon follow me home from the Big Tunnel?